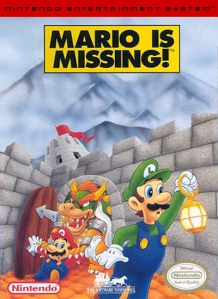 Once every so often, a game will be released on a console and be this at the time of release, or years afterwards looking back retrospectively, it will divide opinion. Games that in one camp, people will love it and denounce those who hate it. On the other side, people who feel the game is an oddity to the series and wasn’t worthy of gracing such fine specimens such as the NES console. For example, Zelda II, which will be crossed on a future occasion. Another game that divided opinion was Mario Is Missing! (no the ! wasn’t added for heightened excitement and pleasure), which featured everyone’s favourite plumber. Is it really as bad as people say it is, or will it go do warmly like a smooth scotch or Irn Bru on a cold winter’s morning?

How does Luigi fit wonders of the world in his inventory?

Mario Is Missing was released in 1993, and developed not by Nintendo’s R&D department but by Radical Entertainment.  As such, it is described as an “educational game”, which does bring a shudder to gamers ears who don’t want to learn whilst playing games, they want to forget about the world and educating themselves.  The premise of the game is that Bowser instructs his Koopas to go around the world stealing world artifacts for his mail order company, and whilst Mario goes to the castle to protect them, he is in fact kidnapped (hence Mario is Missing) so it’s up to Luigi to rescue not only Mario, but the artifacts as well. Quite how Koopas can pick up Eiffel Towers and Pyramids is anyone’s guess however it’s a video game, it’s not supposed to be based upon reality, is it?

When you turn the game on, the first thing that strikes you out about the game is that graphically it looks like Super Mario World on the Super Nintendo. That’s not a bad thing whatsoever as Super Mario World was a great game, so it’s good the developers based the graphics on a proven winner rather than what the CD-I did to Zelda games. You enter the castle, and have to go through doors which although have lock’s on them you can quite easily enter but are nondescript in where they go, and are presented with pipes to go down. When you go down a pipe, then you’re playing the game.

So as Luigi, you go around town hunting the Koopas, stamping on their head to get a bag, which is a clue to where Luigi is in the world. You get the three clues, then realise you cannot go to the information desk without Yoshi. When you then speak to the lady at the counter, she gives you clues about the item that you are supposed to be returning, to which you have to then select the item in your inventory before talking to her again. IT seems unnecessary and a drawn out process for something as simple as returning an artifact. She then asks you an educational question, for example “What does the word Sistine mean in Latin?”. If you get the question wrong you can’t return the item – you have to answer another different question. Depending on how smart you are this could be a quick process or a drawn out long process. So you answer the question with subtle references to Teenage Mutant Hero Turtles and you get your reward – tax free cash! I ask you, when has a game rewarded you not only with cash, but being tax free? It’s not as if as a player you file tax returns when achieving high scores or obtain monetary reward. So this goes on and on, over different cities in different countries and different continents. Don’t forget this was back in the days before the internet so you have to rely on your parents who make you mess up more than anything else, or your Encyclopedia Britannica, so whether it was the on screen graphics or the feeling you’re at school, this game made your brain think and head hurt.

The controls of the game are slightly different to your standard Mario game. The B button makes Luigi jump, the A button when pressed whilst Luigi is moving makes him seem to walk slightly faster. The select button cycles through the on-screen menu whilst the start button selects the item. The menu items that it cycles through includes a map of the city, a world map where Yoshi can traverse quite easily through vast oceans with consummate ease, and the items which you have collected along the way. Music and sound effects wise, it does sound remarkably like Super Mario World, with nice sound effects and decent 8-bit music. Bearing in mind that the characters were licensed and it was a different company that developed the game, it would have been very easy to neglect the importance of the Mario brand and instead have basic music and even worse sound effects. Instead, if ever you were to play this with your eyes closed (which would be a feat in itself), then you would not be mistaken in thinking it was a Mario game you were playing, so put away those headphones and enjoy the 8-bit music instead.

Mario is Missing will always divide gamers, from those who say it’s not a good Mario game and that the educational aspect shouldn’t have been played on, but in theory what better way of getting kids to learn than with characters from video games that they recognize more than they do historical figures from text books they read in school? Yes the game is annoying in that you have to answer a number of different questions about the city you are in, with 6 different multiple choice answers, but on face value, the game isn’t as bad as people make out. What is important is to take the game at face value and to not treat it as a Mario game in the truest sense and think of it as a sequel to Mario 3, or a prequel to Super Mario World. Instead, take it as a game that aimed to help children learn, whilst using characters they grew up with and enjoy. Even I learned something whilst playing the game for this review, I mean come on who really thought Donatello painted the Sistine Chapel? Copies of the game, both NTSC And PAL aren’t cheap but it is worth it, and what is also good is that rather than having a save feature to track your progress, there is a password system which you can enter on the main screen. So if you’re looking for a treat for your collection, do think about Mario is Missing, I mean the chance to play a game where Luigi is the star AND to learn something? Why miss out, and put away your encyclopedia’s, you won’t need those with Luigi around!